How to Use Treats as Positive Reinforcement

Training your new puppy can feel like a full-time job. It requires patience and remaining firm and consistent. At times, training a puppy can involve getting up at all hours of the night, or coming home to a destroyed living room. No one said puppy parenthood would be easy, you remind yourself, and yet, you […]

Training your new puppy can feel like a full-time job. It requires patience and remaining firm and consistent. At times, training a puppy can involve getting up at all hours of the night, or coming home to a destroyed living room. No one said puppy parenthood would be easy, you remind yourself, and yet, you wish it could be.

This is where using positive reinforcements can help your puppy to “catch on” to the behaviors you want him to continue.

What is Positive Reinforcement?

In a nutshell, the term “positive reinforcement” means rewarding your puppy when he behaves in the manner you want. This could be when he completes a command, such as sitting, staying, coming, or lying down. Or when he succeeds at long-term or complex commands, such as refraining from barking while the mailman takes his time delivering the mail.

From your puppy’s perspective, the best reward is food. Canines are primal and highly value food. When a treat is gained as a result of doing any action, the dog will repeat the action for the purposes of receiving more treats. Since your puppy views treats as “positive,” using treats to reinforce your desire for your puppy to display specific, good behaviors is called “positive reinforcement” in the dog training world.

Being aware of the power of positive reinforcement also helps new puppy parents to avoid accidentally “positively reinforcing” negative behavior that the parent actually does not want their puppy to continue.

For example, if you’re with your puppy in public and feeding him a few treats, and someone walks by and your puppy tries to nip the person’s shoe, and you continue to offer your puppy another treat because that’s what you’ve been doing, then your puppy will connect that nipping is good behavior.

Likewise, if your puppy begins barking non stop because he sees the mailman, and you pet him and offer him comfort to get him to “calm down,” he will connect that barking at the mailman is rewarded by affection, and he’ll continue this behavior.

When using treats as positive reinforcement, there are a number of things to keep in mind, which we’ll cover in detail. But the bullet points are:

Dogs are smart animals, which is why using positive reinforcements like food treats can turbocharge the training process and help your puppy learn quickly. In the mind of a dog, however, receiving the treat is the goal, at least at first. So, the dog will try to figure out how to get the most treats possible. Because of this, you may find that your puppy gets into a bad habit of only performing a command when he knows he’ll get a treat. He might ignore you until you show him that there’s a treat in it for him. Never allow this. Don’t bribe your puppy.

For your puppy, having your full attention is thrilling. He loves playing with you and enjoying life by your side. The excitement of sharing quality time with you could go through the roof when he knows he’s behaved by performing a command. Anticipating a treat could have him bouncing off the walls and jumping all over you! But do not reward this uncontrolled behavior. After your puppy has obeyed a command or behaved correctly, offer him the treat only when he’s in a calm, submissive state. Otherwise you’ll run the risk of teaching your puppy that out-of-control excitement is acceptable.

Perhaps the most important stage of training your puppy with positive reinforcement is the process of removing the positive reinforcement, i.e. the treats. You don’t want to end up with a puppy, or worse an adult dog, who will only behave when he’s certain he’ll be rewarded for it. Abiding by your house rules should be rewarding enough. That’s why you should work towards phasing out the treats. You can even begin to replace a treat with verbal praise and pats, here and there, as you train your puppy. Eventually, your puppy should consistently obey you according to what he’s learned without expecting a treat.

As you experiment with positive reinforcements to train your puppy, you might find that some treats work better than others. And you may even discover that your puppy isn’t enticed by treats! Surprising, but it’s been known to happen. In instances like this, try other positive rewards like belly rubs, affection, or toys.

Hands-on, professional puppy training can guide both you and your puppy through the dog training process, which might be right for you. Petland Florida offers 6 weeks of dog training to anyone who takes home a Petland puppy. 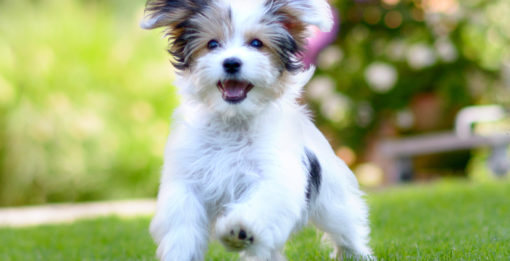 Dealing with a High Energy Puppy

If you recently brought home an adorable puppy, you may notice that your new fur baby sleeps nearly all the time. For many puppy parents, this can be cause for alarm, but they soon learn that their sleeping pup is totally normal and healthy.  Then comes the next shocker. The puppy that used to sleep […] 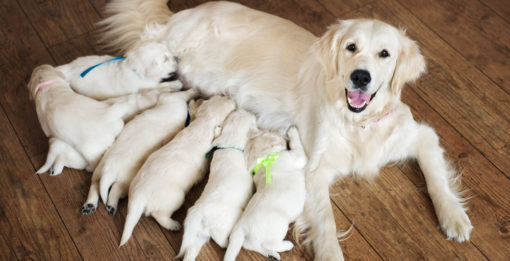 Where Do Our Puppies Come From?

Consumer awareness about puppy welfare has increased dramatically in recent years. Unlike decades ago, people today are getting in the habit of researching where a litter of puppies has come from before they bring home their furry friends. If you’re among these conscientious pet owners, then you also want to know that the puppy you’re […] 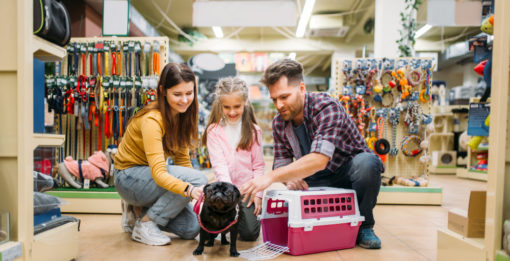 7 Behaviors to Look For in a New Puppy

At Petland Florida, we love helping people pick out the best breed for them and introducing them to our puppies. Our highly-trained pet counselors are true dog breed experts that educate our customers about the specific personalities of the breeds we sell.  Each breed has its own characteristics and every individual puppy has its own […]